New Silk Roads: what are the challenges?

It is at the initiative of China that the ambitious project of the New Silk Roads ("One Belt One Road" (OBOR), renamed "Belt and Road Initiative" (BRI)) is born in 2013 and aims to connect Asia, Europe and Africa via land and sea routes. This project aims to support China's economic development by ensuring its better supply of raw materials and by securing its maritime trade routes, some of which are currently suffering from acts of piracy.

This gigantic challenge unfolds over thirty years and should be finalized on the occasion of the Centenary of the founding of the People's Republic of China in 2049. It requires the cooperation of more than sixty countries located along the roads to be developed. China has already received official support from Russia and announced on March 11 the signature of 16 free trade agreements with countries and provinces directly concerned by the BRI. Negotiations are continuing with the European Union and the United Kingdom in particular. 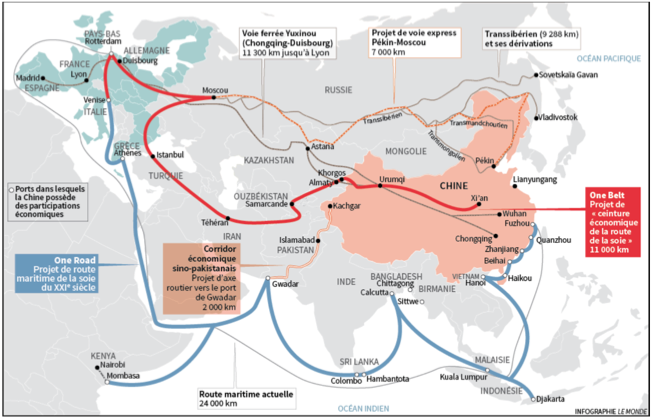 Trade facilitation is the main objective of the BRI. The construction of new infrastructures will allow economies of scale by combining cheaper and faster ways of transport. The harmonization of national legislation, particularly in the field of customs, is an integral part of this project, with a stated objective of facilitating the transfer of goods from one country to another and reducing the duration of their conveyance.

French companies specializing in the fields of construction, transport or NICT experts already see in the BRI an opportunity by partnering with various projects of railways, industrial parks and ports or even road networks.

In 2016, China declares having invested more than USD 14 billion in 53 countries associated with the BRI, notably in construction, real estate or entertainment sectors. The total budget of the New Silk Roads is around 800 and 1000 USD billion, equivalent to five to six times the Marshall Plan.

The acceleration and intensification of trades between China and the old continent are already on their way. The new Lyon-Wuhan rail link (an integral part of the BRI) allows goods to be transported in 15 days (compared with the two months required for the maritime route) for a tariff two to three times lower than air.

Other railway lines of this type already exist on French and European territory (Dourges-Wuhan, Hamburg-Zhengzhou, Jiwu-London, etc.) and the frequency of the lines continues to increase.

Owners of intellectual property rights can be satisfied with this situation: business is also accelerating (both supply and delivery)!

Faced with the hyper-connected Chinese market, French companies are seizing the opportunity: easier visibility in China through the positioning of sales platforms (Taobao® - Online Sales in China : 590 billion USD – source : PRC National Bureau of Statistics, US Department of Commerce, Eurostat) and social networks (WeChat®), supported by an efficient delivery of products ordered online.

These short-term opportunities should however not hide the reality of the market: Chinese companies are proactive and to position themselves in the medium / long term our entrepreneurs shall anticipate and behave certainly with enthusiasm but also with caution.

Beyond the constitution of strong strategies of protection and defence of immaterial assets, which will allow a serene development of business in Mainland China, the behaviour of entrepreneurs will also have to be improved in Europe.

Creation and innovation remain the keys to success, in association with trademarks.

To achieve the maximum benefit from the BRI, French companies will have to be more attentive to the protection of their know-how, the confrontation with the parasitic or counterfeit products is also likely to accelerate. Who would imagine that the parasitic practices, so much feared on the Chinese market, would not spread through the New Silk Roads?

Let's talk, for example, about the wine-making industry, which suffers in mainland China from unfair practices of refilling or from counterfeit labels. The BRI offers an exceptional windfall profit to our winemakers since it notably sets up a particularly suitable transport way (refrigerated wagons or with temperature and humidity controlled). However, they will also have to be ready to identify possible imports of counterfeit goods in Europe.

In this context, monitoring its IP rights (trademarks, patents, etc.) and surveillance, especially customs ones, must take a central position in the intellectual property strategy of every entrepreneur.

In conclusion we will quote Chris Devonshire-Ellis (Silk Road Briefing) : « All it takes is imagination and vision, and an understanding of what China wants. Key to the Belt & Road Initiative are market intelligence and knowledge ».

Should you need any further information or assistance please feel free to contact us.