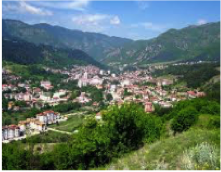 (“the average consumer of mineral water and beverages in the European Union does not have a high degree of specialisation in geography or tourism”, therefore he will not perceive the term “DEVIN” as a geographical place in Bulgaria)

In a recent judgement dated October 25th, 2018 (T122/17), the General Court annuls a decision of the Second Board of Appeal of the EUIPO and affirms the validity of the trademark “DEVIN” to designate mineral water, notwithstanding the fact that “DEVIN” is a famous Bulgarian spa town.

“DEVIN” enjoys a sufficient distinctive character: the EGC notably asserts that the Bulgarian consumer identifies the town “DEVIN” but as well the verbal trademark “DEVIN” considered as well-known by the Bulgarian Office for mineral water. Subsequently, “it appears, prima facie, extremely implausible that the contested mark, namely the European Union word mark DEVIN, has not acquired there, at the very least, normal distinctive character”(point 35).

“DEVIN” enjoys a sufficient distinctive character towards the EU public: As regards the other EU consumers, the EGC considers that the Board of Appeal “wrongly focus[ed] on foreign tourists, in particular Greeks or Romanians, who visit Bulgaria or Devin” and should have taken into consideration “the entire relevant public, consisting of the average consumer of the European Union”. According to the judges, the Board of Appeal made a mistake in limiting its “test” “to a very small or minimal fraction of the relevant public” (point 48).

Following this line of reasoning, the EGC specifies that “the average consumer of mineral water and beverages in the European Union does not have a high degree of specialisation in geography or tourism” (point 64) and therefore, he will not perceive the term “DEVIN” as a geographical place in Bulgaria.

“DEVIN” remains a term which can be claimed as a trademark: it is finally asserted that “the contested mark cannot (…) constitute an impediment to the economic efforts to develop, beyond the borders of Bulgaria, the reputation of the town of Devin for its spa waters” (point 79).

Hence, “the general interest in preserving the availability of a geographical name such as that of the spa town of Devin can thus be protected by allowing descriptive uses of such names and by means of safeguards limiting the exclusive right of the proprietor of the contested mark” (point 90).

As pointed out by the judges, the aim is to preserve the necessary balance between the rights of the proprietors and the interests of third parties, which notably allowed the registration of verbal trademarks such as “VITTEL” or “EVIAN” for mineral waters.

The EUGC’s judgement is available on the following link: http://curia.europa.eu/juris/liste.jsf?language=fr&td=ALL&num=T-122/17

Please do not hesitate to contact us, we are at your disposal to assist you in the choice of your trademark’s sign.