Introduction of the administrative action for revocation and invalidity in France 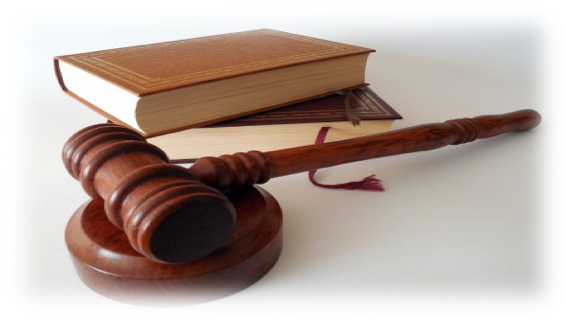 The current health crisis does not prevent the long-awaited launch of the administrative procedure for invalidity and revocation in France.

The major innovation of the “PACTE” law on trademarks, came into force on 1 April 2020: with the creation of a "Cancellation" cell within the French Office, it is now possible to bring an action for a declaration of invalidity or revocation in the form of an administrative procedure.

This new regulation provides a major asset to IP rights owners, obtained with great persuasion from the French Trademark Attorneys, which has as its objective to facilitate access to trademark litigation and to reduce the costs of a strategy to release registers.

From experience, in territories where such a procedure exists and sometimes long-standing as is the case for example in Mainland China: the purely administrative procedure is faster and cheaper in comparison with the delays and costs of legal proceedings.

Article L716-5 of the Code of Intellectual Property is amended to determine the division of competences between the INPI (administrative procedure) and the Tribunal (judicial procedure).

The INPI is thus granted exclusive jurisdiction to deal with actions for revocation (for lack of use) and invalidity (except in the specific case of a claim for invalidity based on copyright, designs or personality rights).

Technically, the revocation and invalidity proceedings before the INPI are fairly closely aligned with the procedures we have before the EUIPO.

I) The grounds for action are as follows:

Where action is taken on the basis of relative grounds, it is possible: 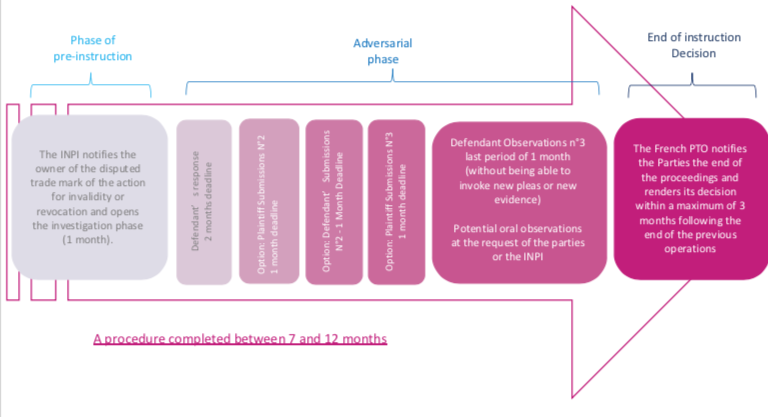 - a pre-hearing phase is introduced during which the INPI informs the owner of the contested trademark of the action (1 month), and examines the admissibility of the action (1 month), ’
- then there is a written contradictory phase (parties are invited to submit their arguments and three written exchanges between the parties are possible within a period of between 5 and 10 months depending on the number of exchanges),
- oral observations may be requested by the parties or at the request of the INPI and request of extension of the proceedings where necessary (in case of amicable settlement…) are possible,
- the decision: the INPI notifies the parties of the end of the proceedings and renders its decision within a period of 3 months (this decision will be subject to appeal to the Court of Appeal).

- The rapid release of registers:
A prior availability trademark search most often makes it possible to detect one or more disturbing prior right, and often there is a lack of use (for 5 years) in connection with the previous trademark. In this case, it will now be easy to neutralize this prior trademark by means of a revocation action for non use.

- The risk posed by a non-distinctive, yet registered mark:
Neutralizing a trademark that is not distinctive, in order to lift the obstacle that constitutes the risk of use of said trademark, is now also facilitated by an invalidity action.

- Facilitated cancellation action after the expiry of the opposition period:
The opposition period in France is relatively short (2 months), and after this period the holder of a prior trademark has so far only benefited from a judicial remedy. Henceforth the proprietor will now have the possibility to file an invalidity action (administrative action) on the basis of an earlier right.

These procedures are implemented to strengthen the rights of our customers, trademark owners, and help us to defend their rights more effectively.
The effectiveness of this measure will be optimal if it is combined with:
- Implementation of watch services,
- An internal process for collecting and retaining evidence of effective use.

We are at your disposal to assist you in these defense processes and to inform you in detail on these proceedings.

You may find the legal text here: